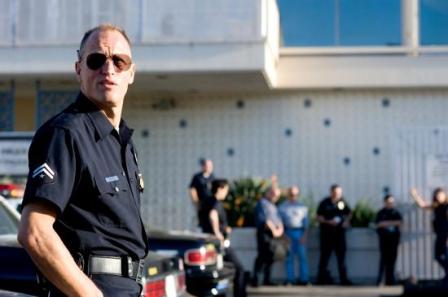 Oren Moverman’s gritty character study Rampart is a seething slow burn just like the morally compromised cop at its core. It  contracts and expands along with Woody Harrelson‘s David Brown, mirroring his rising anger, frustration and sadness in the way it pitches each scene. It opens, for example, dangerously slow with Brown eating fries with his partners. It’s a banal scene, filmed from a distance and could almost pass for something out of Super Troopers (Harrelson would have been great in that!). Soon, however, we begin to grow accustomed to Rampart‘s rhythms, ping-ponging between the violent, hateful cop and desperate father and family man trapped within the same person.

Brown is under fire for police brutality (a scene which Moverman calmly glosses over), and as his paranoia mounts he begins to suspect mass corruption in the department. The mystery, though, is a red herring and Moverman is more interested in tracking Brown’s denial and the inability to adapt which makes him so angry and lonely. Harrelson is terrific, naked and fragile but emotionally specific, and he plays Brown with sympathy and an understanding for his paradoxical desire to be loved and refusal to let others in. The film itself is pulled between these two poles, but Brown’s family struggles are considerably weaker and Moverman too often looks to Brown’s two daughters for raw emotional impact, not Harrelson himself.

Rampart is a tricky portrait of a true antihero, but Harrelson’s presence and Moverman’s sensibilities to the flow of his story make it work.