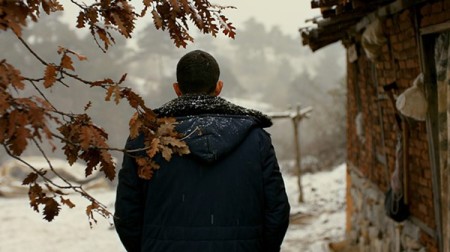 [The Wild Pear Tree plays at MFA Boston this April]

Nuri Bilge Ceylan’s The Wild Pear Tree is a film about the incremental, hard-won wisdom of experience, and the conscious and unconscious sacrifices we make to gain them. Sinan, played with arrogance and simmering scorn by Aydın Doğu Demirkol, is a young college grad returned home to his village in Turkey to find his father buried further into humiliating debt, his friends mostly gone in search of work and the same small-minded people who meet his derision all around him. He’s an aspiring writer, and by all accounts a talented one, but Sinan has that painfully familiar combination of high-minded youthful idealism and entitled laziness. He’s Holden Caulfield mixed with Antoine Doinel.

Throughout the film, Sinan stumbles across a series of encounters that test how his vision of himself translates in the real world—flirting with an old classmate, fighting with her boyfriend and intellectually sparring with an older writer. Ceylan’s leisurely pace and gorgeous, sun-dappled cinematography emphasize this fleeting period of summer idyll in Sinan’s life; the beauty of the country and the simple graces of everyday life are all around him, but Sinan sees only a prison from which to escape into an uncertain future.

Ceylan’s other tactic is to imbue the film with a sense of almost mythical mystery to which Sinan is oblivious. Subtle digressions into dreams and repressed thoughts interrupt the narrative; sensual camerawork elongates passages, as if freezing a memory to explore the specific color of its light or the shifting direction of the breeze. Ceylan’s style itself serves as the counterpoint to Sinan’s misplaced angst and The Wild Pear Tree‘s wisdom. The film around Sinan knows that he has a lot to learn and experience, but it’s up to all of us to figure that out for ourselves, no matter how painful it may be.