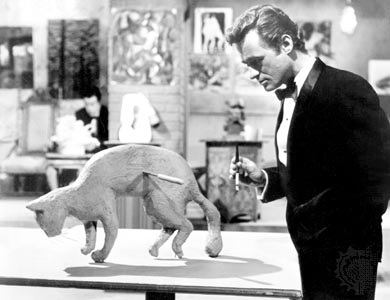 Good horror doesn’t need monsters, gore or sheer terror. A good, creepy premise, simple direction and creative storytelling will do just fine. Depending on your definition, Roger Corman’s A Bucket of Blood may or may not truly be a horror film, but its certainly a lean, effective bit of genre filmmaking.

At just over 60 minutes, this short feature resembles an episode of The Twilight Zone in its construction and 50’s style. The film centers on Walter, a meek, ineffectual busboy at an artists’ cafe, frequented by painters and beat poets espousing their half-baked theories on life and art. Walter is infatuated with this bohemian world and longs to become accepted as an artist among them. One day the bumbling would-be sculptor accidently kills his landlady’s cat and, to hide the evidence, turns the cat into a macabre plaster sculpture. “I made a thing!” he proudly proclaims to his heroes, who praise it for its originality and a certain je ne sais qua. Having tasted fame, Walter follows “Dead Cat” with other sculptures made from larger and more dangerous prey.

Roger Corman, a B-horror legend, directs the film with a refreshing simplicity and doesn’t get in the way of his story. The distanced approach also allows Corman to deliver a dead-on skewering of beat aesthetes and their bloated sense of profundity, giving the film a surprisingly effective layer of satire. There may be relatively few surprises, but its breezy, fun and creepy: a pleasurable genre piece from an assured director.