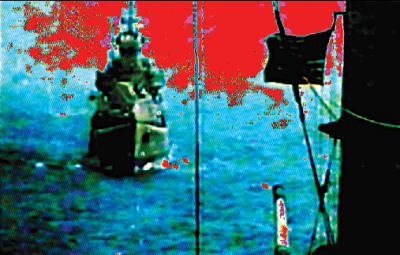 This July, The Museum of Fine Arts hosts its 16th annual Boston French Film Festival, offering a compelling lineup of films from directors both new and old. The shockwaves of the vaunted 60s New Wave are still being felt today, as we’ll see, though the festival also proves that new talent continues to invigorate French cinema. Among the highlights of this year’s program are Film socialisme, the new film from the always-iconoclastic Jean-Luc Godard, an underseen Truffaut gem and the ambitious directorial debut of actor Mathieu Amalric. Continue reading below for my takes on these three films worth the price of admission.

At 80-years-old, legendary French New Wave director Jean-Luc Godard is still pushing the limits of film in bold new directions. His mixed-media video-art essay Film socialisme feels like the work of an indefatigable rebel, not an assured master nearing the end of his career. It’s a daring cacophony of images and sounds and a frustrating formal experiment, but its also a reinvigorating reminder of the possibilities of cinema.

Somewhere buried beneath its melange of fractured bits of different languages, Film socialisme is about the dis-integration of European identity, historical, linguistic and cultural. It’s mainly comprised of overlapping conversations between unidentified wanderers, each speaking his own Finnegans Wake-like blend of languages, making true communication impossible. This effect is approximated by “Navajo English” subtitles, which translate only the few keywords a foreign listener might discern (“people ignore others … ourselves mirror”). Godard also doubles the effect cinematically; his palate of different grades of audio and video are as varied as the film’s linguistic building blocks. Often, he mixes the styles of streaming video, cell phone cameras, home videos and hi-grade film stock, creating a visual and aural aesthetic as confused as the film’s language.

What I’ve just described surely sounds maddening and distancing, and it is. Still, Film socialisme has a method behind its madness. In its own muddled way, it has much to say about our failures to communicate, the power of images and the makeup of our cultural identities. Godard may consider modern Europe an isolating tower of Babel, but he’s expressed this idea through the unifying language of cinema. Film socialisme, then, is the perfect title for his experiment. It truly is for everyone because no one has any advantage in unraveling its meaning.

Also featured at the festival is an older film from Godard’s New Wave partner in crime, François Truffaut. The Soft Skin, a family melodramedy, revolves around Pierre, a famous literary scholar and lecturer, a husband and a father, and a liar and a cheat. After a chance encounter in an elevator–a beautifully staged sequence–he becomes infatuated by Nicole. (And who wouldn’t? Françoise Dorleac is somehow even more radiant than her sister Catherine Deneuve.) He soon begins an affair, and The Soft Skin traces his many shades of desperation and humiliation. Emotionally, the film is risky, and its success rests on the performance of Jean Desailly. Slightly rotund and quite smarmy, he must provoke both the audience’s disgust as well as a kind of tragic empathy. He is far from likable, but The Soft Skin delights in exploring Desailly’s complicated persona.

Watching The Soft Skin, I was reminded of Steven Spielberg. Perhaps because Truffaut starred in the latter’s Close Encounters, but more likely it’s because, like Spielberg, Truffaut is a very economical director. His films are far from styleless, but Truffaut’s principle gift as a filmmaker is that he never gets in the way of his own storytelling. His camera is always in the right place to catch nuances of a performance or a line of dialogue, and his cuts are fluid and provide momentum. For its puckish avoidance of easy characterization and its breezy craft, The Soft Skin holds up today as one of Truffaut’s underseen greats. 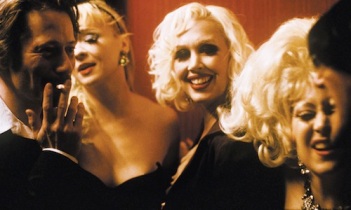 Among the many films offering a modern perspective on French cinema is the directorial debut of the extremely talented actor Mathieu Amalric. It’s hard to avoid the influence of the New Wave in any French film, but Amalric seems to have taken more from frequent collaborator Arnaud Desplechin than from the old masters. Like Desplechin’s Kings and Queen, On Tour is a frenetic, messy and intriguing portrait of a downtrodden protagonist. Amalric stars as Joachim, a chain-smoking mustachioed Burlesque producer struggling to shepherd his harem of American performers around France: just the kind of lovable jerk character Amalric has mastered.

As a director, Amalric fares well whisking Joachim through moments of petty frustrations and mild redemptions. The film is essentially a collection of many short, often banal scenes featuring Joachim or the girls in his show, and while the structure gives the film a brisk pace, it’s a bit overlong and some moments seem far less telling than others. For a first film, though, On Tour is ambitious and largely successful. When he can find the same pitch-perfect subtly in his directorial style that he showcases in his acting, Amalric will be a director to watch.