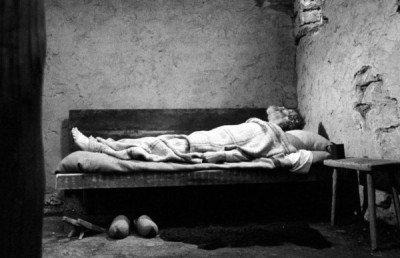 [The Turin Horse plays at the New York Film Festival on October 9th.]

Hungarian filmmaker Béla Tarr has stated that The Turin Horse will be his final film, and if that’s true, he’s crafted quite a cinematic exit and a film about the struggles, or even the impossibility, of submission. Legend has it that philosopher Friedrich Nietzsche’s mental collapse occurred after he witnessed a coachman beating his horse who refused to budge. He ran to the horse, threw his arms around it and fell mute until his death many years later. Perhaps Nietzsche saw that this horse had it figured out, Tarr slyly posits, and his film imagines the beast of this apocryphal story’s decision to simply give up. What’s the point, anyway?

In austere, black and white long-takes, Tarr examines the bleak, mundane existence of the coachman and his daughter. Day in and day out they repeat the same chores ad nauseum, eat boiled potatoes with their hands and stare blankly into the relentless gale sweeping over the godless landscape outside their window. Though these are just the tasks of rote survival, Tarr renders them with exquisite attention to detail, considering the characters’ rustic tools, dirty clothes, hard beds and even harder faces. The expressive lighting, rhythms and textures of his shots are hypnotic; yes, the film does demand some endurance, but the slow pace and mundanity of the action isn’t only justified, it’s essential. The film’s visual style is perfectly calibrated to inhabit these characters’ survival from the inside out.

Twice in the film, the coachman and his daughter are visited by people from the outside – people without the same strictly utilitarian lives – and are introduced to ideas and an ethos. God is dead, all sanctity has been defiled, people live to acquire and debase the world around them. “Come off it, that’s rubbish,” the coachman says. They are too ignorant to receive these ideas, but, of course, they’d have made no difference. Philosophy is of no use to them; there’s no room in their lives for anything but work and survival.

But, slowly over the course of the film, Tarr begins to strip away even the comfort and assurance that life is simply survival. With grand dramatic and metaphorical gestures, with a kind of sadistic glee, he exposes them to the cosmic joke of their lives: what’s the point, anyway? To the last, the coachman clings to what he’s known (“We have to eat,” he says defiantly), but it’s the Turin Horse who realized earlier that even that can carry no meaning. God is dead, we’ve moved beyond good and evil and all that remains is stark darkness.