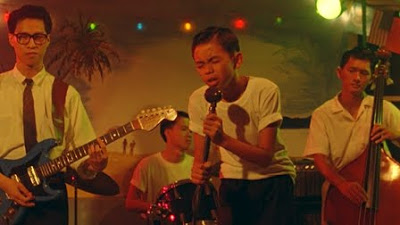 [A Brighter Summer Day plays for the first time in the US on November 25th at the Lincoln Center.]

Thanks to a release by the Criterion Collection, Taiwanese director Edward Yang’s heartwarming Yi Yi, one of the best films of the 2000s, is widely available in the US. Alas, not much of his other work is, so a career-spanning retrospective at the Film Society of Lincoln Center beginning tomorrow should interest curious New York cinephiles. Perhaps most notable in the series is A Brighter Summer Day, Yang’s epic 1991 chronicling of Chinese immigrant life in Taiwan. At four hours long and with over 100 speaking roles, the film is a sprawling work, bursting with intersecting stories. Still, Yang exhibits masterful control, deftly balancing his many threads and thematic concerns.

Set on the eve of the 1960s, A Brighter Summer Day is a compassionate historical story of the anger, sadness and frustration of exiled Chinese struggling with life in Taiwan. Though Yang makes room in his expansive running time to touch on the unique situations of a great many characters, he focuses on the next generation of exiles: grade-school children who turn to street gangs to establish a new identity for themselves. They inherit their parents’ malaise, though perhaps they don’t know it. They’re concerned with girlfriends, Elvis songs and the few Western films that reach their island, not the secret police, haunting memories and unfulfilled expectations like their parents. Still, through subtly repeated dialogue and situations Yang poignantly suggests that the existential affects of exile will not disappear with the older generation. Though perhaps less warm and convincing with personal emotional material than Yi Yi, A Brighter Summer Day gains strength from its scope and the connections Yang makes among the disparate threads of his massive tapestry structurally, dramatically, and, most importantly, visually.