The experience of life—all kinds of life—aboard a large commercial fishing vessel reaches almost mythic proportions in the experimental documentary Leviathan. Armed with a fleet of tiny, cheap GoPro cameras, directors Lucien Castaing-Taylor (Sweetgrass) and Véréna Paravel (Foreign Parts) render the creak of metal, the crash of the ocean and the throngs of sea creatures larger than life. From one shot to the next, our perspective swings across every corner of this floating ecosystem, gradually constructing a composite beast made from equal parts of man, nature and machinery. Leviathan positively floods the senses, and the result is a unique and exhilarating cinematic experience.

Like the best films, Leviathan‘s form and content are inextricable, two sides of a single artistic expression. The grainy, low-grade video images of the filmmakers’ GoPro cameras don’t just constitute a visual or aesthetic choice, but an ethical one. This isn’t a documentary about commercial fishing in any traditional sense, but an effort to violently splinter our perspective and scatter it across the ship. The perfect tool for the job, the GoPro cameras offer us perspectives of pin-point precision. They don’t just capture a close-up of a bird, they shoot from inside its ruffled feathers; they don’t just film the deck from a low angle, but from the floorboards themselves.

Castaing-Taylor and Paravel understand the only appropriate use for a new cinematic technology such as the GoPro: not to replicate human senses in the name of “realism,” but to use technology to articulate a new realm of sensation beyond the human.

This experiential quality of Leviathan is aided by its often abstract imagery, like streaks of light against a dark sky or a jumble of canvas netting and writhing fish. We’re often not sure exactly what objects we’re seeing, or even which way is up, but the raw graphical power of the images is striking and revelatory. The effect is like some of the best avant-garde filmmaking: a move away from representation and towards pure visual expression.

Even more important to the omniscient perspective and sensory experience of Leviathan is the thunderous post-production sound design by Ernst Karel. Manipulating and embellishing the poor quality—but nonetheless remarkable—audio of the GoPro cameras, the sound design rumbles with low end and swooshes across the theater to approach a 360 degree window onto the world.

The effect is most striking during shots that continually dip under the ocean surface. The dull, peaceful quality of washed-out underwater sound is even more pronounced against the roar of the sea and wind when the camera resurfaces. When you feel the whine of the ship’s motor in your bones, you’ll understand the sea monster of the film’s title.

Between the intensity of the sound and the boldness of the visuals, the full power of Leviathan can only properly be experienced in a loud and dark theater. When you step outside the theater, however, the film’s new perspectives of sight and sound linger. It’s rare that such an experimental film appeal as much to the senses as to the mind, and rarer still that both of these sensations come so intertwined. 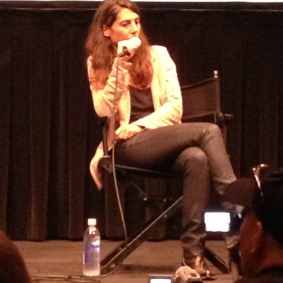