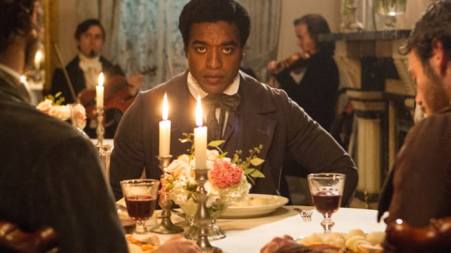 [12 Years a Slave is part of The New York Film Festival, and opens in limited release on October 18th.]

Only three features into his filmmaking career, visual artist Steve McQueen has cemented his position as a major cinematic talent. His subject matter is challenging and volatile (prison brutality in Hunger, sex addiction in Shame), and his compositional skill and poetic, textured imagery supply the visual weight to match. McQueen’s films can be aggressive and heavy, but there’s always a sensitivity and even a tenderness the underlines the experience. Tackling the physical violence and violent psychology of slavery with his harrowing new film 12 Years a Slave, McQueen demonstrates both of these tonal tendencies and confirms his status as a director to watch.

12 Years a Slave is adapted from the 1853 memoir of Solomon Northup, an educated, free black man living with his family in Saratoga, New York who was kidnapped and sold into slavery in the deep south until his improbable escape a dozen years later. Northup is played with fragility and passion by Chiwetel Ejiofor, a strong actor who crafts his best performance in this extraordinary and demanding role. Appearing in nearly every scene, Ejiofor is tasked with anchoring McQueen’s unflinching and complex look at the psychological effects of the institution of slavery, with capturing Northup’s fear and anguish, but also the deep intelligence he was forced to hide plantation masters.

That 12 Years a Slave manages to dramatize this psychology without grandstanding, and often without words, is no small feat. The key is that each member of the film’s ensemble cast—slave and master alike—is able to communicate the deep emotional and moral toll of slavery with his or her physicality. As Northup moves from plantation to plantation and encounters other slaves and owners, the film’s episodic structure allows for a wide variety of these wounds to emerge in the actors’ faces. The film’s large cast of recognizable actors can be a bit distracting (especially Brad Pitt’s small, moralizing role), but wrenching work from Lupita Nyong’o and, in particular, Michael Fassbender show a complex and terrifying blend of rage, empty stupidity and deep sadness. (By now the secret is out that Fassbender is possibly the best actor working today, as his work in all of McQueen’s films demonstrate.)

Learning to “externalize the internal,” to imbue a character’s face with his inner conflicts, is Acting 101, but it seems particularly important to McQueen in this film in which bodies are reduced to currency, to mere objects. It strikes me that the raw physicality of bodies, of simple flesh and bones, is an important theme in McQueen’s young body of work. Whether they’re slowly degrading in Hunger or numbed and overstimulated in Shame, bodies are reduced to tools, and the specifics of this process reflects the psychological anguish of McQueen’s characters. 12 Years a Slave depicts many scenes of shocking and unsettling violence, but it also understands the even greater violence of robbing human beings of their own body, of reducing it to property.

12 Years a Slave is often disturbing, but, like all of McQueen’s work, it finds amidst violence potent expressions of humanity and even hope.