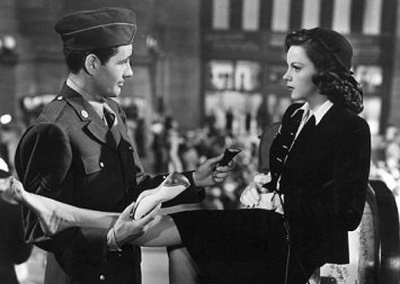 In Vincente Minnelli’s elegant and sophisticated war-time romance The Clock, a charming and tender lonely-hearts love story slowly cedes to a sober consideration of the costs of love and commitment. It seems a rare trick for an Old Hollywood genre piece, to indulge in the populist pleasures of its form while undercutting its naiveté with a dose of realism. But it’s the sincerity of Minnelli’s tone that elevates The Clock; the director isn’t interested in easy cynicism, just in engaging with the romance this genre provides in the first place.

The clock begins ticking when Robert Walker‘s wide-eyed, small-town G.I. Joe pulls into New York for the first time. He has 48 hours of leave, but he seems too intimidated by the sprawl and scope of the city to even leave Penn Station. Among the throngs of travelers, he bumps into Judy Garland‘s Alice (the prototypical meet-cute scenario, it’s true, but Minnelli explores this theme of serendipity rather than simply using it as a device), who agrees to show him around town.

As the pair slowly fall for each other, Minnelli’s camera becomes drawn to their young faces, framing woozy close-ups that replicate the weightlessness of being drunk on love. Minnelli allows himself this moment of indulgence, and even the swell of a romantic score, but he avoids cheap sentimentality by rooting the story in sincere and convincing emotion. Unlike other Hollywood romances, however, The Clock isn’t over when its young lovers unite. Instead, the impending end of Joe’s leave forces the pair to confront their separation, and stop the momentum of their growing affection to consider the consequences.

Here, the film ingeniously uses the backdrop of New York City to represent the one-in-a-million odds they seem to be facing. The skyscrapers loom large for Joe, the avenues teem with people, and the lovers struggle to drown out the chaos of life to commit to each other. The city, then, represents a giant mixing pot, not of cultures but of souls, a force of fate that thrusts people together and just as easily separates them.

This consideration of the costs of commitment—the film’s impressive restraint to temporarily put the breaks on an alluring, whirlwind romance—is The Clock‘s greatest accomplishment. In this way, it succeeds in dramatizing an emotion akin to the feeling of Richard Linklater‘s Before… trilogy, something much deeper and truer than mere romantic attachment. Somehow, Minnelli brings his characters and his audience from the cliches of Hollywood’s idealized version of love, to a mature understanding of what it truly means for two people to be together, all without sparing the happy ending which—it’s true—occasionally happens in life.