The Best Performances and Scenes of 2014

I recently shared my Top 20 films of the year, but while 2015 is still young and its great films are months away, there’s still time to look back at 2014. In this post I’ll name my favorite lead and supporting performances and count down some of the most memorable scenes. Recognizing some under-appreciated actors and small moments, even in films I may have disliked overall, gives me the chance to mention other titles that landed just outside my Top 20 of the year and attempt to rectify the year’s biggest Oscar snub: Ralph Fiennes.

Steve Coogan as the narcissistic Alan Partridge gives the kind of committed comedic performance that’s too often taken for granted, but Ralph Fiennes in The Grand Budapest Hotel is a subtler, though no less skillfully comic presence, able to rattle off Wes Anderson’s rapid-fire dialogue and keep the film a buoyant delight.

I swear I’m not trolling when I say that I prefer the touches of real humanism that sneak into Scarlett Johansson’s performance as a superhuman in Lucy to her icy aloofness in Under the Skin. Still, relative newcomer Essie Davis is simply ferocious in The Babadok, simultaneously terrified and terrifying.

J.K. Simmons shows how to be appropriately, not distractingly, loud in Whiplash, but the majority of my favorite supporting performances make the most of naturalism. Ethan Hawke relies on his natural charisma to great effect in Boyhood, showing real evolution over the film’s twelve years, but Mark Ruffalo’s understated, lived-in performance in Foxcatcher really blew me away.

Patricia Arquette and Katherine Waterston are both scene-stealing surprises in their respective films, for very different reasons, but only in Listen Up Philip does a supporting character literally steal away a film’s narrative focus. One of the many intelligent choices in Alex Ross Perry’s caustic film was to unexpectedly change courses, allowing the protagonist’s girlfriend the individuality and focus she deserves, and Elisabeth Moss strikes a ringing note of optimism in the otherwise pessimistic story.

Best Scenes of the Year: 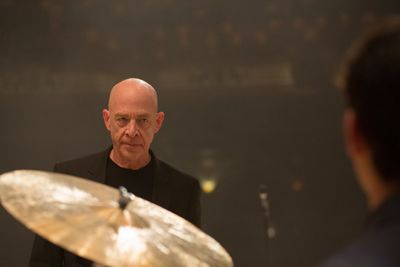 Whiplash: “Caravan” – Whiplash‘s finale sets the emotional showdown at the film’s core within its most rousing and thrilling musical setpiece.

Goodbye to Language: “3D Headache” – An improbable superimposition formed from splitting the two halves of a 3D picture shows that Godard is constantly searching for new filmic images.

Lucy: “Car Chase” – Say what you will about Lucy‘s ludicrous science, its novel, breathless car chase against traffic shows that deliberate choreography is far more effective than the shaky action style that dominates today.

The LEGO Movie: “Everything is Awesome!” – I knew I was in good hands with The LEGO Movie when this delightful earworm bursts onto the scene. Even more impressive, the filmmakers are able to mock the naivety the song represents while still recognizing its pleasures.

Blue Ruin: “Messy Revenge” – The small-scale but supremely confident thriller Blue Ruin is at its best generating suspense from a series of perfectly-timed images that convey action. An early sequence that ends with a closeup of knife in a car tire perfectly encapsulates this philosophy.