A Trio of Recent Releases

Black Mass is an aggressively mediocre and middlebrow film, unconvincing and utterly inert. Through three features, director Scott Cooper (Crazy Heart, Out of the Furnace) hasn’t demonstrated much of a personal style, but where Out of the Furnace at least exhibited competent dramatic staging and a tidy understanding of character, Black Mass is completely leaden and tone-deaf.

I had been looking forward to seeing Johnny Depp play a human being again after over a decade of cartoonish performances, but it seems I’ll have to keep waiting: his Bulger is just as much a collection of tics and costuming as his Wonka. From scene to scene Depp is serviceable and occasionally interesting, but the ultimate failure to create a compelling screen version of James “Whitey” Bulger is most likely also Cooper’s fault for blunting the actor’s impact with a lack of narrative clarity and bafflingly clumsy staging. A dinner scene provocation that’s meant to be menacing lands with a thud; his personal relationships and elements of his past are raised only to be dropped again without further exploration. Taken together with the grotesque visual design of the character, Bulger becomes something like a phantom, an aimless malicious spirit more than a complex person.

Cooper’s handling of the supporting cast is equally misguided. Leaving aside the questionable casting and even more spotty accent work, there’s no forethought or purposefulness to these characters within the narrative. Themes of loyalty to ones roots are intoned but never internalized by anyone; the women are grossly underwritten and inconsequential, disappearing after one scene of little importance. I love Adam Scott, but what purpose does his character serve in this film? Jesse Plemons looks completely ridiculous playing dress-up in his wig and fat suit. And look at how Corey Stoll, the new prosecutor, is introduced. We know he’s a hard-nosed, no-nonsense guy because: 1) he’s introduced poring over paperwork during his predecessor’s going away party; and 2) we are told. Laughable. 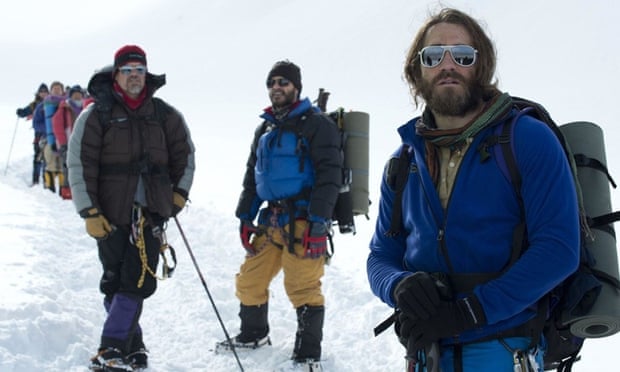 Remarkably, this effects-laden, IMAX 3D survival thriller doesn’t come across as simply another Blockbuster action spectacle; instead, it feels deeply respectful of the true events that inspired it and the actions—both heroic and questionable—of the humans it depicts.

Everest does an admirable job of dramatizing the well-known story, sticking closely to the facts as presented in Jon Krackauer’s book Into Thin Air. Krackauer himself is a character in the film, one of at least a dozen members of several mountain climbing expeditions attempting to summit Everest in the spring of 1996 who were met with disaster when a rouge storm lead to the death of several climbers. The events the film covered are not easily wrangled into Hollywood screenwriting conventions, but screenwriters William Nicholson and Simon Beaufoy make the right choice. The film occasionally struggles to juggle multiple characters across confusing geography, but the inherent drama carries the film from moment to moment—even if it lacks its own strong thematic structure.

Mistakes were made by many of the climbers, but director Baltasar Kormákur (Contraband, Two Guns) lets the events unfold without pointing fingers, foregrounding the conditions that make rational thought impossible at such high altitude and proceeding to the next event. In fact, there’s little Kormákur does do to adorn or internalize the story—a few unnecessarily maudlin tugs at the heartstrings notwithstanding—so the film’s principal appeal is the raw visual presentation of the narrative as written. Seeing the film in IMAX 3D didn’t have the visual weight I was expecting, unfortunately; the 3D almost comically foreshortened the actors against the mountains, and Kormakur attacks the grandeur of Everest as he does the rest of the film, head-on and matter-of-factly without much of an artistic purpose. Still, simply visualizing the events of this story is compelling enough.

At its best moments, Phoenix is a sharp and insightful portrait of the messy fallout from an unimaginable trauma, both personal and national. Nelly, a concentration camp survivor who is presumed dead, is helped back into Berlin by a friend. She’s been brutalized inside and out, and needs facial reconstruction surgery, rendering her unrecognizable. Despite rumors that her husband Johnny had betrayed her to the Nazis, Nelly seeks him out, and Johnny begins coaching the women he perceives to be a stranger to assume Nelly’s identity.

In its first half, the film investigates Nelly’s personal trauma externally, through her expressive face and in particular the way she carries herself. She can no longer even walk across a room the way Johnny remembers because her entire body habitus has changed. She has become a completely different person: a victim. These physical changes reveals the (perhaps a little too) neat central metaphor that Petzold’s finds in the device of facial reconstruction, focusing on Nelly’s struggles to become herself again.

This is a fascinating premise, and one that eventually blossoms and bares fruit, but much of the film’s second act relies on a tricky chemistry between Nelly and Johnny to play the strange scenario as tender, creepy and downright despicable all at once. These scenes are necessary, but I’m not sure Petzold does enough to imbue them with the dramatic weight they need.

For me, the film’s final act beautifully expands on these ideas transposing Nelly’s personal trauma onto a national backdrop, exposing the callousness of German society for allowing the Holocaust to happen and be quickly swept under the rug. The game Nelly and Johnny are playing begins to fester as the horrible roles each person has played in her tragedy begin to emerge. The film’s final scene is a stunner and brilliantly conveys all of the emotional subtlety the second act struggled with.