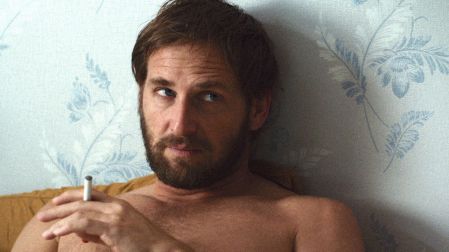 With touches of the surreal and a jagged, lurching pulse, The Mend turns what is ostensibly a black sheep comedy into a nervy, altogether unfamiliar experience.

In plot and tone, the closest analog might be Withnail and I, though searching for an exact match would be a vain endeavor. The story revolves around two brothers, Mat (Josh Lucas) and Alan (Stephen Plunkett). Mat is hedonistic and course, scraping out an existence scamming people with undelivered web design work as he couchsurfs around New York City, perpetually overstaying his welcome. On the surface, Alan is more put together. He has an apartment and a soon-to-be-fiancée, but there’s a deep-seated rage and unhappiness we instantly read in his face and pregnant pauses. Over the course of the film, Mat and Alan messily and drunkenly hash out their personal and familial issues, as dishes pile up in the sink and they tip into a strange mental state.

The film’s style of, as the poster declares, “stressed-out comedy” is abrasive and provocative. The neuroses on display can get a bit grotesque and exaggerated, but there’s method behind the madness. While the film’s unique tone is certainly alienating at first—I felt I recognized personalities even if they didn’t immediately coalesce into complete characters—as The Mend begins to crawl under your skin, its power becomes more apparent.

These feelings I’ve described as “nervy,” “stressed-out,” or “under your skin” are evoked slowly and subtly by debut director John Magary. He composes his piece with impressive confidence and modest audacity; this doesn’t look or sound like other indie comedies you’ve seen. For example, the sound of encroaching helicopters outside Alan’s apartment appears diegetic at first, but as the film spirals into the heads of its characters, it takes on a more mysteries cast, something disembodied, spectral, haunting. Combined with the use of discordant chamber music, the sonic textures of the film signal that Magary’s intentions reach well beyond laughs.

Even if some of The Mend‘s themes of anxiety and shared history felt a bit opaque to be truly potent, they’re serviced by layered performances from Lucas and Plunkett. Lucas’s is the showier role—he makes playing the screw-up look like a lot of fun—but he also hints at a deep pathos behind Mat’s outrageous behavior. There’s a wild desperation in his eyes, an anxious, restless quality that encapsulates the feel of The Mend overall.