Where to Start With… Apichatpong Weerasethakul

[Diving into a new cinematic topic can be daunting. This series provides some suggestions on where to begin exploring a director’s body of work, a genre, style or theme. The three suggested films serve as a brief introduction; they’re not complete or authoritative, but will in some way be representative of the topic and hopeful inspire you to watch more, outlined in recommended further viewing.]

Apichatpong Weerasethakul—affectionately called simply Joe by writers in the West—is a modern Thai filmmaker, video artist and installation artist. He gained acclaim and exposure in contemporary international art house circles for his 2007 film Syndromes and a Century, and became an even bigger critical success after winning the Palme d’Or at the Cannes Film Festival for 2010’s Uncle Boonmee Who Can Recall His Past Lives. Apichatpong’s films can be oblique, and yes, difficult for the uninitiated, but there’s real warmth and boundless life to discover in his unique worlds.

Apichatpong is a rare humble auteur. He has a distinctive and personal style, but he thrives on the contributions of others and welcomes the outside world into his films. For example, in his debut feature Mysterious Object at Noon, Apichatpong and a small crew traveled around rural Thailand and asked the people they encountered to add to the story as it evolved. Similarly, his films often tip their hands to show elements of the filmmaking that would normally remain hidden. To Apichatpong, recognizing that he and his crew are active participants in the world is more important than maintaining a fiction.

Another manifestation of this auteristic humility is the proliferation of worlds contained within Apichatpong’s films. These works teem with life: human, animal, plant, ghost, even microbial. All of the possibilities within a space—past, present, and future—can collide in the same film, even in the same shot. This impulse probably connects to the strain of hushed and graceful Buddhist spirituality within his films, as well as a deadpan magical realism.

Apichatpong’s films, then, are about multiplicity. They’re about all of these worlds and realms sharing the same space. Fiction or reality, past or future, human or spirit—all are valences of the same existence. 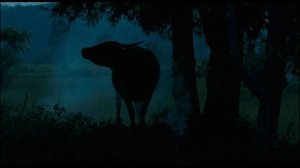 I’ve decided to arrange these recommendations backwards because in many ways Uncle Boonmee is the distillation of all of Apichatpong’s concerns. The film deals with memory, both of a dying man who recounts his other reincarnations, and the national memory connected with the northern region of Nabua. The area’s violent past as a site of government aggression against supposed communists connects to Boonmee’s own past and seems to leave a psychic scar on the region. But there’s great levity in Apichatpong’s films as well, never more so than here when dealing with a race of strange ape-men and a randy talking catfish. It’s a magical and beautiful blend of the fantastical with the political. Ready my full review here.

Watching only Apichatpong’s features would give an incomplete picture of his body of work. He also creates conceptual short films and multifaceted installation pieces around distinct themes. Both this short and the feature Uncle Boonmee are elements of a larger project called PRIMITIVE, dealing with memory and the political history of northern Thailand. This stunning piece is an artist’s statement of sorts, an alternate version of the feature film that shows the presence of the filmmakers mingling with the ghosts of these locations. Both films are interested in the ways in which the past continues to bear on the present, and are potently cinematic and curiously moving.

Syndromes and a Century is an enigmatic film, but a wonderfully playful and inviting one, like all of Apichatpong’s cinema. With a warm and quiet tone, the film exudes love for its characters, doctors in both rural and city hospitals. Its structural divide between city and country is tempting to read as condemnation of urbanity, but there’s a lot more subtly to Apichatpong’s design, and the film opens itself up to multiple meanings and emotions rather than condensing them to a single interpretation. My advice: resist intellectualizing the film and let its delightfully languid pace lead you along.

Apichatpong Weerasethakul, Installation, Thailand, Uncle Boonmee Who Can Recall His Past Lives, Where to Start With