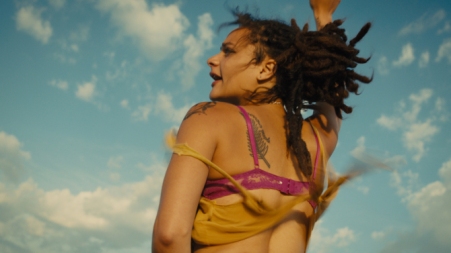 With its fringy naturalism, American Honey presents a unique snapshot of contemporary youth and culture, but its impact as pathos and drama will depend on the tolerance of its audience. One woman’s travel of self-discovery could be another’s roadtrip that refuses to end.

British director Andrea Arnold has been known for sensitive, gritty realism (Fish Tank) and stormy emotional turbulence (Wuthering Heights), and though these modes may seem opposed, they combine in American Honey. The film, cast largely with non-professional actors and photographed in real locations around the country, follows a hardscrabble teenaged girl, Star (Sasha Lane) who impulsively joins a gang of other poor, directionless youths to travel the midwest in a van. Their stated goal is to peddle magazines for a shifty impresario (much like an older version of themselves), but work seems secondary to partying, drinking, singing along to hip-hop and socializing in truck stops and seedy motels.

The film is both episodic and freewheeling as it follows this curious roadtrip across the country. A common pattern emerges as scenes of driving, walking door to door, carousing and bedding down for the night are repeated across new locations. At best, this tactic gives the film a dependable structure, a baseline against which the mood and emotions of young Star can be tracked. At worse, it feels repetitive and unvarying, trying the audience’s patience and making the film’s nearly-three-hour runtime hard to justify. That American Honey is largely plotless is not a problem—plenty of great films are. But that, like its lead, it keeps jumping back on the bus for wont of something better to do, is more trying.

The pleasures to be found in American Honey, however, have nothing to do with its narrative, but with the underrepresented faces on display. There’s a genuine political force behind Arnold’s casting of real young people. These are normal, lower-class Americans you can find across the country but would be hard-pressed to find anywhere on film screens. They’re mostly natural presences in front of the camera, too, especially the uninhibited and thoughtful Lane. Arnold affords the cast of misfits leeway to be themselves, and for her part remains remarkably open and flexible with her restless, roving camera to capture their spirits and inflect the film accordingly. She has an incredible, palpable sensitivity that is a rare and precious asset to cinema.

The way Arnold uses handheld camerawork and nervy, jittering montage rhythms to capture the moments unfolding in front of her represents the film’s biggest strength. It leads to small, subtle gestures of true beauty and connection that dot the film’s runtime. However, this same improvisational urge makes American Honey a slog to get through. This particular film may not have been for me, but I remain excited to see what Arnold continues to bring to cinema in the future.