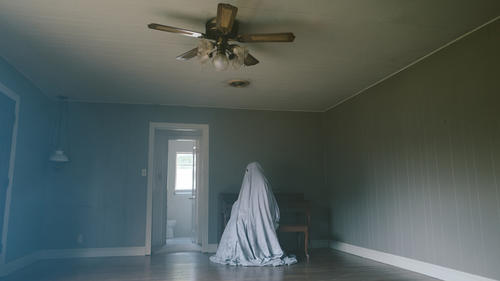 Lowery wrings emotion from the authenticity and naturalism of Rooney Mara and Casey Affleck, but the real stars are those strange glints of light you see on walls, or particles of dust illuminated by windows. The physicality of a particular space becomes integral to this tale of a spirit connected, unstuck in time, to a simple home, but capturing the feeling of a location aesthetically is also among the film’s greatest strengths. Aided by a square aspect ratio with rounded edges, Lowery gives a compelling density to his images that makes the central house feel solid and real, a space with genuine stories to tell.

A Ghost Story is an ambitious film in its own quiet way. With very little dialogue and an emphasis on stillness it addresses complex and wide-ranging thematic issues. When these aesthetic and thematic ambitions coalesce it creates some of the film’s best moments. One sequence, for example, intimately bathes Mara’s face in a warm light as she listens to an emotional piece of music, only to strip away that intimacy and warmth in a gutting cut forward in time. When these concerns are out of synch, however, I feel a bit of shakiness in Lowery’s vision. The film uses many long takes, for example, but not all have the heft to justify our prolonged attention. A clunky extended monologue later in the film also feels strained and out of place.

Ultimately, though, A Ghost Story is a quiet and thoughtful tone piece, an eerie and oddly comforting presence we don’t often see at the movies.

[For a few more, spoiler-filled thoughts, see my review on Letterboxd.]