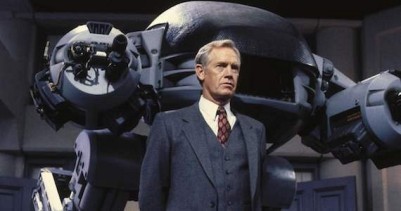 RoboCop—both the film and the crimefighter—are full of contradictions. The character is part man, part machine; the film is part bloody action flick, part smart comedic satire. It’s also one of the rare films to do both well. It’s an action film with brains, but with balls, too.

Paul Verhoeven depicts a fantastical yet recognizable sci-fi world that gives his action personality and his ideas credibility. The bureaucratic and insidious corporation behind RoboCop, as well as the anarchic society lurking outside, are painted perfectly: they’re over the top, but grounded by specifics that make everything work in the world of the film. Like his contemporaries David Cronenberg (Videodrome, The Fly) and John Carpenter (They Live), Verhoeven employs a snappy but blunt directorial style which foregrounds his creative and often subversive content. The approach gives shocking bursts of violence more punch and, more importantly, ensures that the heady theme of RoboCop’s humanity never feels forced or ponderous. But these themes, of course, are just window dressing for a killer action film. Or perhaps it’s the other way around.

[Even after almost 25 years, RoboCop is apparently still relevant for a city in need of a hero: Detroit. Despite the less-than-flattering portrayal of Detroit in the film, fans hope to erect a statue of RoboCop to watch over the Motor City. A kickstart campaign has raised over $65,000.]