I recently interviewed screenwriter Andrew Lanham, whose script The Jumper of Maine earned him a Nicholls Fellowship from the Academy of Motion Pictures Arts and Sciences as well as two coveted awards from the Austin Film Festival. He spoke about his new-found success in the interview, which you can find at NewEnglandFilm.com here. Lanham also took the time to share some screenwriting tips that have helped him kick start his career. 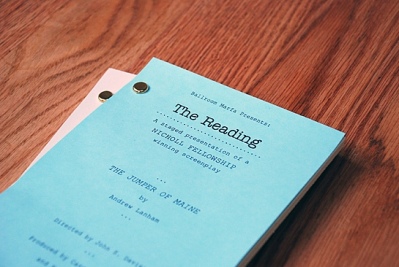 Did you always know you wanted to be a screenwriter?

I did not always know. In fact, for a very long time I thought I wanted to be an actor. After finally being diagnosed toward the end of middle school, my Tourette’s was pretty bad. I was lucky to grow up in a really theatrical family, so I was one of those theater rat kids growing up, always tagging along with my parents to the plays and musicals that they were in when I was little. Toward the beginning of high school I started performing myself, and every time I walked out on stage, my Tourette’s vanished. Many people with Tourette’s, when faced with a situation that requires intense focus, have their “tics” vanish, and that was certainly the case with my acting. It’s actually how I came up with a main theme of Jumper. Whenever Oliver is on a medical emergency, his tics disappear.

As I grew though, mainly during college, it started to look like writing was where I should head in life. I suppose it took a while for my idea of myself to catch up with what I was truly working toward. Now I know this is what I want out of life, because it’s what I’ve been working toward all this while! Thank goodness, because now that I know, the idea of acting kind of terrifies me.

You mentioned many other scripts in various stages of completion. Are those projects that you intend to continue working on, or do you think they were stepping stones for you to complete Jumper?

I think the whole experience of the past few years has been a series of stepping stones toward completing Jumper, and those stones are still in process. Jumper is definitely the best thing I’ve written so far, and although that’s scary (can I do it again?), it’s also a great honor. I was lucky enough to have experiences in life that I could turn into something that hopefully will affect people positively someday.

There’s no other script that’s done beyond a first draft. Some of the other things I’ve let go, or realized that they were important steps in either working toward understanding my craft, or working toward understanding myself. One or two of the scripts I’ll be moving forward with into new drafts as I continue writing, including what I’m working on now. I’m trying to push myself to hold onto the emotional, earnest tone that seems to move people so strongly in Jumper, while working toward a more overall commercial, sellable body of work.

This may be a very broad question, but where do you get inspiration to start a screenplay? How do you go from nothing to having written the first page, and what was your experience with the germ of Jumper?

It’s a broad question, but it’s a good one! At the beginning, I would tend to have a large number or random ideas that would bounce around in my head until they began to gel into something concrete. This was the case with Jumper, but ultimately it became about one core thing, even though there’s a lot of other stuff happening around it. Now I try to push myself to have that core idea first and then let the other pieces form around it. This is helpful simply in terms of structure and having the script work more fully as a film.

In terms of going from nothing to the first page, my process helps a lot with that. I write longhand during the day and then type up my pages on Final Draft in the afternoon. The blank Final Draft screen scares me a whole lot, but the pen and page makes me feel free. There’s no pressure. I can do whatever I want because it doesn’t need to be right! For any writer, I think, whatever one can do to make the first few pages feel less intense, more like the first step into the pool of a very long process, helps a great deal.

How difficult is it to cut a scene or a line that you love? What sort of barometer do you use to take a step back and judge what is truly working?

I don’t really find it difficult at all. The year I spent home, writing my first script, helped a lot with this as well. I didn’t buy or read any screenwriting books when I wrote my first script, so my first draft was 250 pages without any slug lines! So I had to start over, and start over, and start over. In this process I found again and again that scenes or lines I loved would move in the strangest ways. In one draft there would be a line that I thought was great! In the second draft the line could pop up in a different place, said by someone else, and I’d think, it was meant for this place all along! That’s my favorite part of screenwriting: the moment when you’re in a new draft and you discover that. It’s the coolest thing.

So anything has to go if it’s hurting the structure or the story, no matter how good it is. But even when that happens, even if it’s sad, I can just tell myself, well maybe it’s going to show up somewhere you never expected.

As I write, every morning, I read from the beginning of my drafts, no matter how far along I am. So by the time I’m into a new draft, I have most things that I really love memorized. I try not to look at the old draft when I move into the new one; I’ve read it so many times by then that I know most of the things I want in, and I just try to have faith that if it should get in, I’ll remember it.

Could you speak a bit more about the discovery that comes from making wrong decisions as you write? How can an abortive false start yield usable elements that end up in the script?

I’ve realized I tend to start one or two scripts, get about 30 pages in, and then start over and it’s basically a brand new movie. Somewhere in those first one or two though, the original germ idea sprouts into a new idea, and eventually that new idea becomes the script or story I feel like I have to tell. Then I get to the end.

And then I start all over again.

You mentioned the screenwriting lesson of “externalizing the internal”. Could you give an example from Jumper? How did you take that lesson and fit it into your own style?

I don’t know if it’s a lesson you can fit into your own style, because it’s really the core lesson of screenwriting. No matter what your style is, it’s what you habe to do. In this draft of Jumper, at the end, the love interest, Alison, is in a toy store with her daughter. One of Oliver’s “tics” is to make this honking noise. At this point in the film, Oliver and Alison have broken up. Alison misses Oliver a lot, but she knows she can’t be with him, because it’s not healthy for either of them. But I can’t have Alison just walking around talking about how she misses Oliver. You have to figure out a way to show it. So as Alison and her daughter are walking around the store, we hear a honking noise. Alison lights up, running through the store looking for what she thinks must be Oliver, until she finds a little boy in front of a bunch of stuffed honking ducks, squeezing them over and over. Her face falls, and we know.

When Alison and her daughter get home, Oliver is waiting across the street. He wants Alison back; she says no. But when the daughter leaves the car, she’s got the duck in her hands and asks Alison if she wants it and squeezes it. Alison sends her inside, but now Oliver knows: he’s been given an external sign to know he should stay.

Before I was told to externalize the internal, I don’t know if my brain would have been able to think up the above.

I really responded to what you stated was the theme of the film: the difficulty of overcoming “conditions” and accepting yourself. More broadly, how do you deal with “theme” when writing? Did you have this in mind as you wrote, and consciously try to weave into the script?

In Stephen Kings “On Writing” he says that with the first draft you should never think about theme. When you go back to the second, you should head into it aware of what the themes are and try to emphasize them and work them in more broadly. I think this is the best advice in terms of that. The first draft is for you, and you also have to focus on story, story, story. Once you have it, you can capitalize on what the themes are. In a script, character arcs are also very important, so you should know those before you start the first draft, or at least have a strong idea. In the ways that the lead characters change, your themes will become more apparent as well.

Since you write so many drafts of script, do you ever get bored or frustrated with it? If so, how do you overcoming that and approach it with fresh eyes with the goal of improving it?

Maybe I’m a glutton for punishment, but I just never get bored doing it. I don’t know why! I think once you find a script to work on that you love, you really love it, or at least I do. Why else would I be doing it? So when a draft is done, it’s great for a day, but then it’s almost sad: what the hell am I gonna do now? The fact that it’s never done, that it’s always moving and being restarted, means I get to hold it within me that much longer. I think the drafting process, how intense and absolute it can be, is unique to screenwriting, but it’s also unique in that it mirrors real life in a lot of ways. As people, we are taking the same basic thing (ourselves) and starting over in new and amazing ways, over and over.